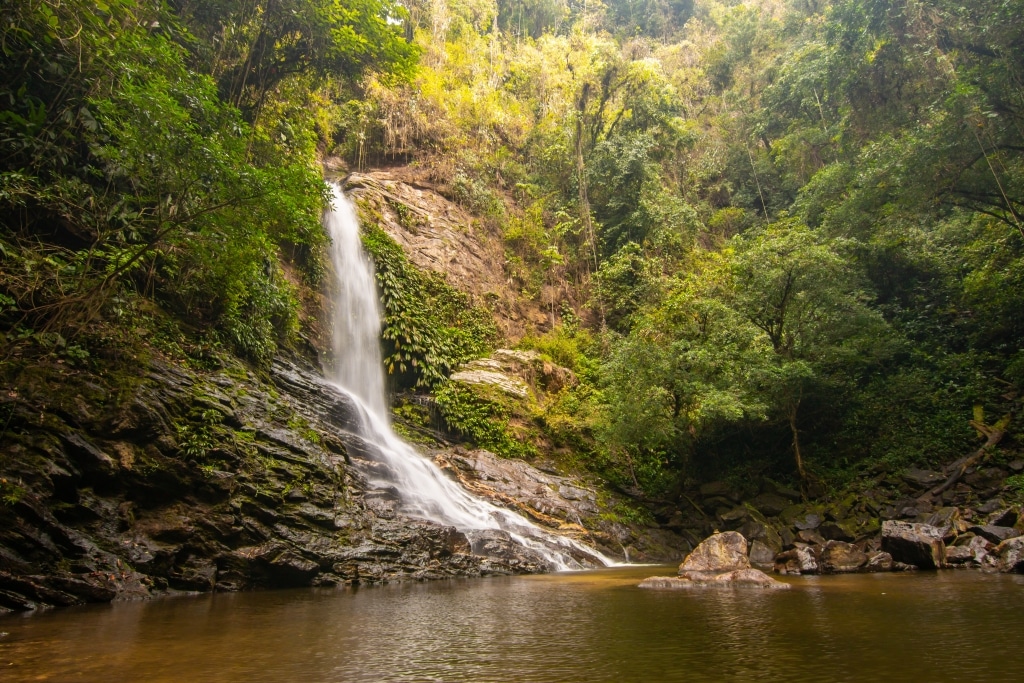 Teyuna, Buritaca-200 or Ciudad Perdida (the Lost City) is one of the more than 250 ancient villages…

Teyuna or Ciudad Perdida was discovered in 1976 by a team of archaeologists from the Colombian Institute of Anthropology headed by Gilberto Cadavid and Luisa Fernada Herrera. It was almost entirely restored between 1976 and 1982.

Members of the local indigenous tribes, descendants of the Tairona culture – the Arhuaco, the Koguis, the Wiwas and the Kankuamos – have stated that they visited the site on a regular basis before its rediscovery was made public and way before Lost City treks started, but that they had kept a secret about it.

They call Ciudad Perdida “Teyuna” and believe it was the most important spiritual center at the time, heart of a network of villages inhabited by their ancestors, the Taironas. Ciudad Perdida, which can be visited nowadays thanks to Lost City treks, was probably the political and manufacturing center of the region. It is located in the valley of Buritaca river and probably inhabited by 2,000 to 8,000 people. It was apparently abandoned during the Spanish conquest.

The site that can be reached only by taking the so-called Ciudad Perdida trek, extends between 900 and 1,300 meters above sea level, on the foothills of Cerro Corea, in the northern face of Sierra Nevada de Santa Marta mountain range, on the right side of Buritaca river.

The area within Ciudad Perdida-Teyuna Archaeological Park includes a complex system of constructions, flagstone trails (trails paved with flat-cut stones), stairs and containing walls, path connecting a series of circular terraces and platforms on which the ceremonial centers, houses and food storages (silos) were built.

The structures that were discovered so far occupy an area of approximately 35 hectares, in which more than 240 stone terraces and more 240 stone rings can be found. Since its discovery, Ciudad Perdida and Ciudad Perdida treks have been managed and regulated by the Colombian Institute of Anthropology and History (ICANH), which is the public entity in charge of Ciudad Perdida-Teyuna Archaeological Park.

Being an archaeological park conserved by a national authority, located inside of the National Natural Park of Sierra Nevada de Santa Marta -which overlaps with a native reservation inhabited by local indigenous groups too-, in order to reach the Lost City through a Lost City trek it is necessary to make a series of contributions to both communities living in the region in which the trek takes place. This includes farming and indigenous communities in charge of performing maintenance on the trails, and to keep peace and harmony on the way to this ancestral site.

Ciudad Perdida-Teyuna Archaeological Park can only be visited through several days of walking in the heart of the amazing tropical forest of Sierra Nevada, in a guided tour that takes between 4 and 6 days – the so-called Lost City or Ciudad Perdida trek – operated by TEYUNA TOURS, travel agency based in Santa Marta, Colombia. This adventure is designed for people who prefer to go at a quicker pace, and who have a tight travel schedule. This adventure is designed for people who prefer to go at a slower pace, even without having much time.